Burks campaigns for Congress in Sedalia

JOHNSON COUNTY — The primary election is only a few days away, and voters will have some big races on their ballots, ranging from U.S. Senate to Johnson County Presiding Commissioner.

“If voters are unable to get to their polling location on Election Day, there are three more opportunities (Friday, Saturday and Monday) to absentee vote,” Johnson County Clerk Diane Thompson said. “It is a primary, so they will need to be prepared to choose a party ballot. In Missouri, we don’t register by party affiliation. Our primaries are open primaries, so any voter can part in the election. They can choose whichever party ballot style they wish.”

Voters must select a party ballot when voting Tuesday: Republican, Democrat, Libertarian or Constitution. Only one question is on the ballot — a proposed Holden sales tax — so only voters who live in the City of Holden can request a non-partisan ballot, which would include only the tax question.

Thompson noted that many voters consider themselves to be independent and do not affiliate with a particular political party. However, all the ballots in a Missouri primary are affiliated with a party.

“While you may consider yourself an independent voter, to vote (in the primary), you’ll have to select a party ballot,” Thompson said.

With absentee voting nearly over for the August election, Thompson said it has been lower than the 2020 primary election, but she mostly attributes that to COVID-19 and the state of the pandemic in 2020.

As of Thursday afternoon, Thompson’s office has received about 460 absentee ballots, which is close to a 50-50 mix of in-person and mailed ballots.

Despite the lower numbers compared to 2020, Thompson said the current turnout is about average for a normal August primary. She is anticipating a 30-32% overall turnout for registered voters, which she said is on par with what her office would normally see in an August election.

“Every election is important,” Thompson said. “We have some races that have received a lot of attention in Johnson County and Western Missouri. I think it’s going to come down to every vote making a difference. We have seen races in the April election that come down to one or two votes. I don’t think any race on this ballot will be that close, but I think we’ll have some close races. If people want to see their candidate on the ballot in November, they need to vote in this election.”

New voter registration for the primary election has ended, but if a voter has moved within Johnson County, they can update their address even on Election Day.

Polls will be open from 6 a.m. to 7 p.m. on Election Day. Voters can check to see if they are registered and view a sample ballot at jococourthouse.com. For more information, visit jococourthouse.com or facebook.com/DianeThompsonCountyClerk or call 660-747-7414.

The following candidates and issues will be on Johnson County ballots, although ballots will vary depending on where a voter lives.

Shall the municipality of Holden, Missouri, impose a sales tax of one-half (1/2) percent for the purpose of providing funding for local parks and storm water control for the municipality? 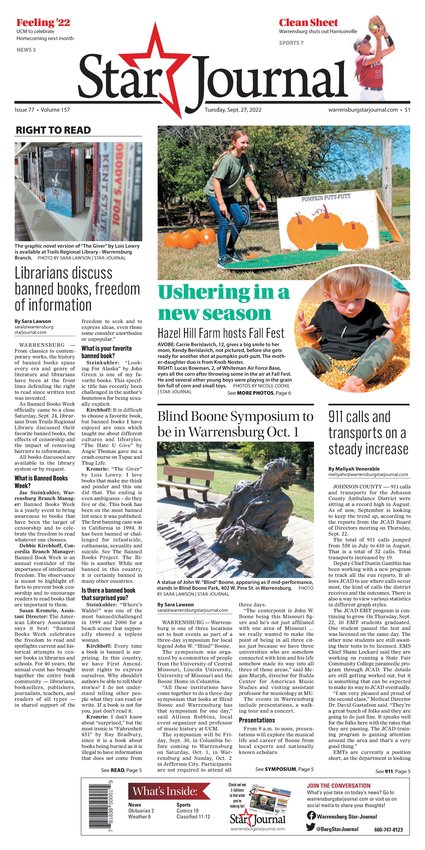